How Chinese Actually Express I Love You In Mandarin Chinese

In this article, we are going to introduce how Chinese people actually express ‘I love you’, or their love towards someone, in Mandarin Chinese. We will also introduce some common vocabulary, slang, and idioms used in Chinese to describe relationships.

I moved to the States about 10 years ago. Recognizing the difference between how Americans and Chinese express their love was an interesting topic.

As many of you may know, how to say I love you in Chinese, is “我爱你 Wǒ ài nǐ.” But what you may not know, was that when I grew up in my family, I never heard my parents say “我爱你 Wǒ ài nǐ” to each other, at least not in front of me. And this is a very typical case in a Chinese family. Don’t get me wrong. My parents love each other. I have no doubt of that. They express their love in actions, not really verbally. They take care of each other whether they are rich or poor, whether they are healthy or sick.

Love can be deep or shallow. But no matter what you experience, express it! Let the one you love know of your love for them, by your actions or verbally! 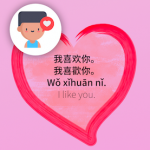 This is the most common phrase used when Chinese express that they are attracted to someone. Keep this in mind, when we say “我喜欢你 Wǒ xǐhuān nǐ” in Chinese, it doesn’t necessarily mean we have less feelings towards someone compared to when you say “I love you” in English. We are just not used to saying the word “爱 ài” out loud! 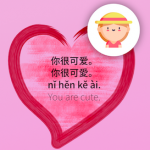 This can be used when you think the person looks cute or you find their behavior adorable. 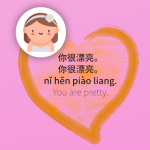 You can use this to tell a girl that you think she is pretty. It is not necessary for her to be your girlfriend. When people flirt in Chinese, this is something they will say to a girl. 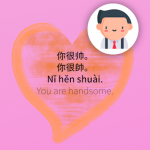 Pretty much the same usage as the one above. Just this is said to a boy or a man. 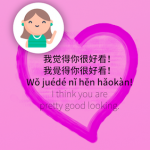 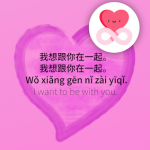 The translation is “I want to be with you,” we particularly refer to “to be with you” in a relationship, not just for a few minutes or a few hours. 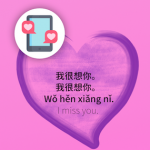 I will say this is another common and indirect way to express your love in Mandarin Chinese. If you haven’t seen your partner for a little while, this is a great way to tell them your love and feelings for them. 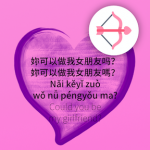 It used to be common for a boy to pursue a girl and it was rarely seen vice versa. But I have to say it is so different nowadays. So, of course, you are welcome to replace “女朋友 nǚ péngyǒu girlfriend” with “男朋友 nán péngyǒu boyfriend.” 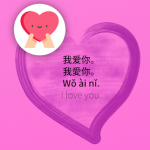 In the older generation, people are not used to expressing their love by saying 我爱你. But I do notice that since the Internet and travel have become popular, western culture has started to mix with Chinese culture. The younger generation is not shy about expressing their feelings to their significant one with 我爱你.

A fun fact about the “爱 ài love” character in Chinese: Whenever I teach the word “爱 ài” in Chinese, I always mention that I prefer this character in traditional Chinese rather than simplified. If you compare these two characters, 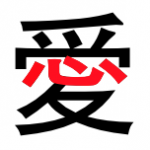 Do you see the difference? In the middle of the traditional character, there is a “心 xīn,” which means “heart” in Chinese. Who can love without a heart?!

A fun culture fact: Do you know we have a few different characters for being “married” to someone?

嫁 jià is used when a woman is “married” to a man. For instance,

娶 qǔ means a man “marries” a woman. For instance,

I married my first girlfriend. 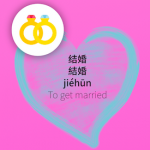 This is the most general term that we use for getting married in Chinese.

If you are in a stable relationship and both of you commit to each other, then it is time for you to say this “我們結婚吧！ wǒ men jié hūn ba!” 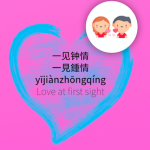 You can use this idiom when you have a crush on someone at first sight. For instance,

I fell in love with her at first sight. 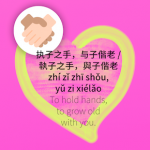 偕老 to grow old together

So, if you combine the meanings together, to hold your hand, to grow old with you. We usually use this to bless them when someone gets married. I personally really like this idiom. The moment you decide to hold a person’s hand, you wish to hold that same hand to the end. In today’s generation there are now less and less couples willing to commit the rest of their lives together. This idiom reminds me that when making a commitment, you have to work at it.

We use this saying to describe a couple that has been through some hard times and they have finally worked everything out to be together. For instance,

After solving the opposition from both of their parents, they finally are able to be together.

I am secretly in love with him

Both phrases mean to express, to reveal one’s feelings. But we mostly use them when we adore or admire someone. For instance,

She has secretly been in love with him for a while. She will finally confess today.

We use this phrase to describe a person who focuses on only one thing or one person at a time. When we use this in a relationship, it means someone is not looking around. He or she only has love for one person.

There is another similar phrase, 专情 zhuān qíng, which we only use to describe a person who is faithful in a relationship. For instance,

He is a faithful boyfriend. He and his girlfriend has been together for 5 years.

On the other hand, this is the phrase to describe a person opposite to the above. If we say someone is “花心 huāxīn,” it means someone who is unfaithful in the relationship.

Two people in a relationship where there is a big age gap. This saying originally used to describe a romance where the man was significantly older than the woman. But it also can refer to a woman who is much older than the man.

He and his girlfriend got to know each other on the Internet.

In this section, we will introduce some vocabulary that we use in Chinese to cell and introduce our significant one.

These two are the most common phrases to refer to your boyfriend or girlfriend. But there is one thing to keep in mind. In English, some females will use “girlfriend” to refer to their close female friends. We never used “女朋友 nǚ péngyǒu” in this situation.

Both phrases have similar pronunciations with the English word “baby.” We use these two phrases when describing our significant one. We use them in conversations, as well as in text messages.

When you would like to introduce your fiancé or fiancée to others, you can say,

He is my fiancé.

She is my fiancée.

We have quite a few phrases to describe husband and wife in Chinese. Let’s learn how to use them!

老公 lǎo gōng, this is the most common one to call your husband. You can use it privately. You can also use it to introduce your husband in a rather informal setting. Same usage as 老婆 lǎo pó. Let’s see some examples,

Woman: Honey, do I look pretty in these clothes?

Woman: This is David. He is my husband..

Man: Honey, what time will you be back today?

Man: This is Karen. She is my wife.

This pair of phrases can be used in both formal and informal settings.

These two phrases are usually used in a formal setting. For example, when you make your vows at the wedding,

Your officiant: “Will you take this woman/man to be your wife/husband, …”

We have published two other fun Love-Related posts, check them out! 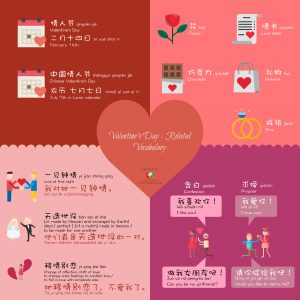 You have learned how to say I love you in Chinese and the many related vocabulary, sayings, and idioms. What do you call your significant one in your language? Share with us in the comments!